The history of Reggio Emilia’s municipal infant-toddler and preschools is profoundly woven with the life and thinking of Loris Malaguzzi. 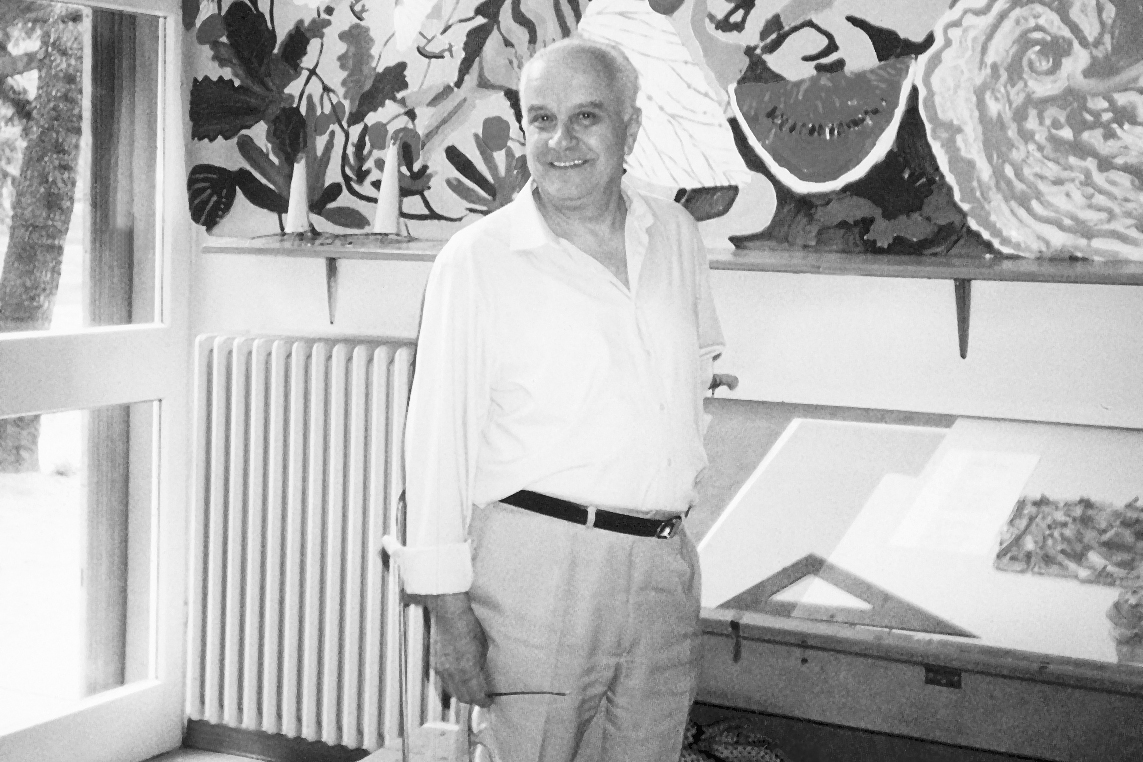 Loris Malaguzzi was born in Correggio on 23 February 1920. He grew up in Reggio Emilia where he attended the Istituto Magistrale secondary school, and graduated from Urbino University with a degree in pedagogy in 1946

During the war he worked in elementary and middle schools in Reggio Emilia and some of the smaller outlying municipalities in the province of Reggio Emilia such as Reggiolo, Sologno, and Guastalla. This important human and educational experience  shaped many of his later choices.

Malaguzzi’s formation was eclectic. He began writing as a journalist in the late 1930s and after the war he collaborated with the newspapers Progresso d’Italia and l’Unita. He was interested in theatre, cinema, art, sport, politics and education, and actively participated in Reggio Emilia’s new cultural life. During these years he joined the Italian Communist Party.

At the end of 1946 Malaguzzi was first a teacher and then Director at the Convitto Scuola della Rinascita in Rivaltella, Reggio Emilia. The Convitti schools were created by the National Association of Italian Partisans, and the Ministry of Employment, to allow ex-freedom fighters and prisoners aged 16-24, the chance to learn a trade.

Through the Convitto school Malaguzzi began to weave relations with international pedagogy. He was interested in the ways education was debated elsewhere, and as a member of Federation Internationale Comunités d’Enfantes (FICE) he participated in the first meetings of European pedagogy held in the post-war years.

He personally witnessed the evolving of self-managed education in the Reggio Emilia countryside, run by the Italian Women’s Union (UDI), and starting with the Villa Cella school which opened 1947. The widespread participation and solidarity of people of all kinds, and the great attention given to childhood had profound effects on his future choices and thinking.

His reading was wide and varied, and not only in the field of pedagogy. Italy was finally opening up to international culture after the years of Fascist dictatorship and like many young academics Malaguzzi took the opportunities that were offered. In Rome, at the National Psychology Institute – run by Consiglio Nazionale delle Ricerche -  he participated in the first courses on Educational Psychology, a subject which had been banned under Fascism.

In 1951, in his role as psychologist, he was one of the founders of Reggio Emilia’s municipal Centro Medico Psico-Pedagogico, a centre for medicine, pedagogy and psychology, where he continued to work for almost twenty years with the director Doctor Marta Montanini and Doctor Iannuccelli.

"The Centre for children with disabilities and learning difficulties became a special context,  where his thinking on education could develop and where he could discuss his points of view with others.

A small school opened at the Centre and was named after Giuseppe Lombardo Radice. It was attended by young children who otherwise were destined for the Istituto De Sanctis in Reggio Emilia’s extensive San Lazzaro mental homes. This school evolved into a sort of experimental workshop, with particularly attention towards the areas of motor skills, and the languages of expression. 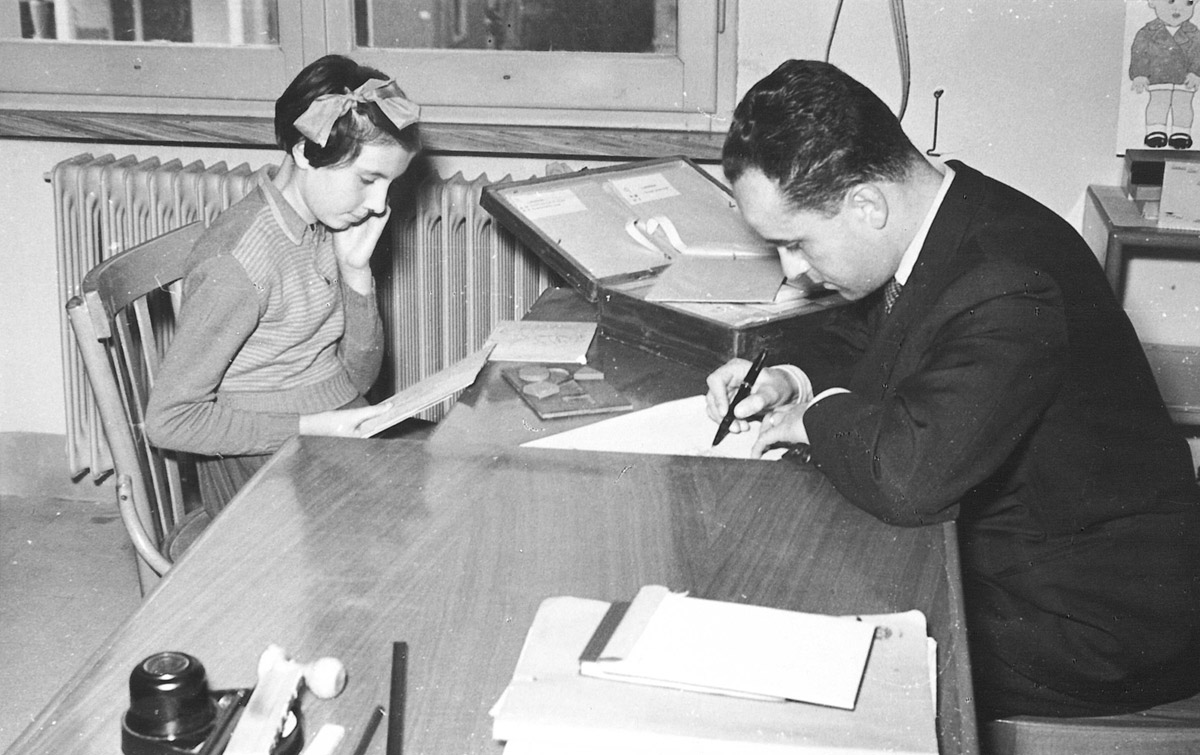 In the early 1960s Malaguzzi began trying out and testing his ideas during Summer Camps (which he immediately re-named Holiday Homes) run by Reggio Emilia’s municipality at the seaside in Cesenatico and which he organized for Reggio Emilia and Correggio municipalities with his friend and colleague Sergio Masini. Activities in the Centro Medico Psico-Pedagogico and this experiences in the Holiday Homes often wove together.

In 1963, when the municipality opened its first preschool, the Robinson Crusoe, Loris Malaguzzi’s career was already rich and varied, with experience of working in early childhood, primary and adult education, and experience in the municipal psychology services and summer camps with schoolchildren.

In his role as psychologist at the municipality’s Centro Medico Psico-Pedagogico, Loris Malaguzzi was asked to collaborate with the new educational project of municipal preschools. In the city community interest quickly developed in this project, and Malaguzzi contributed to making the schools places of experimentation and innovation.

While working in education in Reggio Emilia, Malaguzzi was also the pedagogical consultant to preschools of Modena municipality from 1968 to 1974.

These were the early years of international meetings and exchange, and dialogue with other realities in Italy. Relations developed with the Centro Educativo Italo-Svizzero and in the 1970s –  the decade when the majority of Reggio Emilia’s municipal preschools and infant-toddler centres opened – the cultural project had already taken shape. 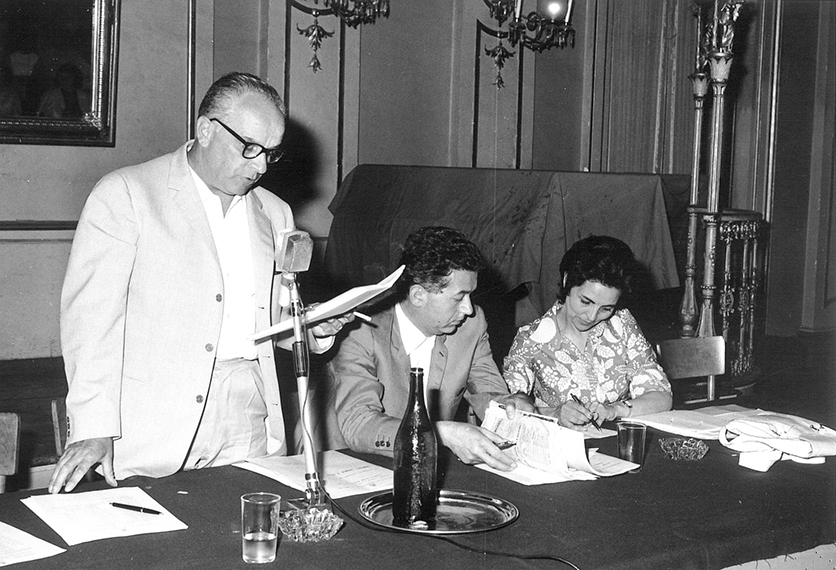 Reggio Emilia became the theatre of rich debate on education and childhood, with several different opportunities for formative and professional growth. Often special people established friendships and affinities with Malaguzzi and the schools, including Bruno Ciari and the educational work of Bologna, and Gianni Rodari who dedicated his Grammar of Fantasy to Reggio Emilia. 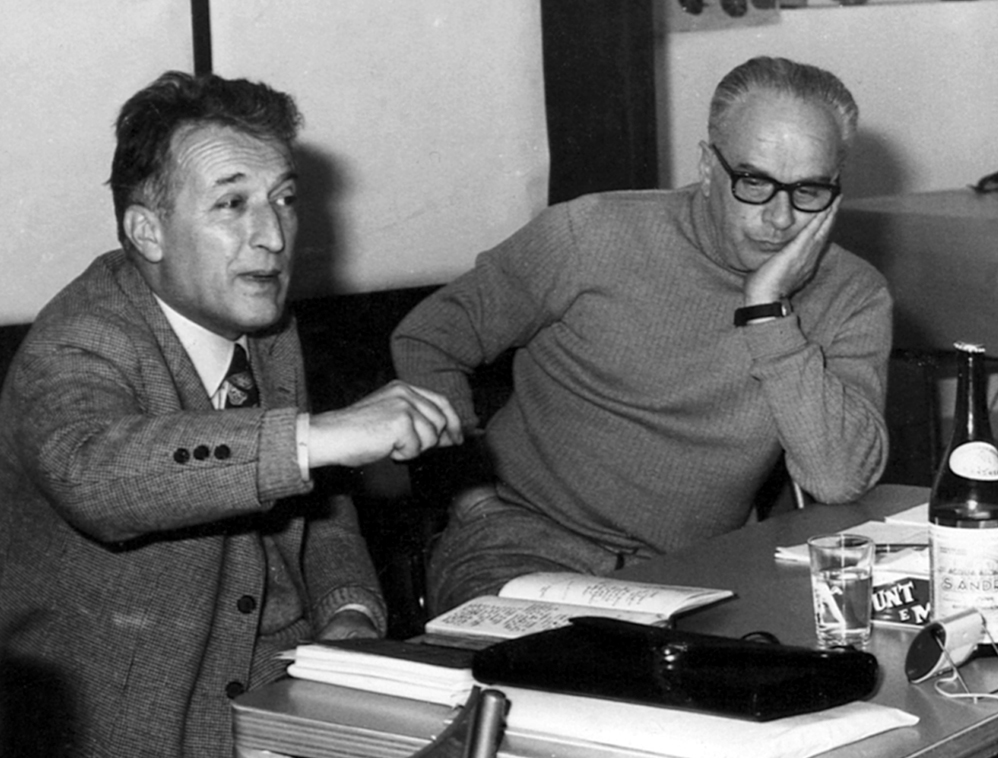 The construction of Loris Malaguzzi’s thinking took place in the infant-toddler centres and schools, with the children, in meetings with teachers and the Pedagogical Co-ordination Group, in meetings with the City Committees that existed in each centre and preschool, and in the halls of the City Council meetings during the writing of the Regolamento ‘Rulebook’ (1972) which sanctioned the foundational elements of Reggio Emilia’s work with preschool education.

During these years he travelled widely in Italy and Europe, finding suggestions and ideas, and always holding the different levels together, interweaving several kinds of knowledge.

In 1976, with Ferruccio Cremaschi, Loris Malaguzzi accepted a proposal by Fabbri Publishers to act as Director of the early childhood journal “Zerosei”. This journal, with its open debate on national education policy, became an important place of exchange for the work underway in several Italian cities. In 1985 “Zerosei” became “Bambini” and was published by Edizioni Junior. Loris Malaguzzi continued as Director.

In 1980, in Reggio Emilia, Malaguzzi founded a nationwide organisation for early childhood education - the Gruppo Nazionale Nidi e Infanzia - with the intention of creating a network for a co-ordination, discussion and impetus for experiences developing in various areas of Italy. He acted as President the organization until 1994.

During the 1980s Loris Malaguzzi’s thinking developed, increasingly it became the collective thinking of the Reggio Emilia educational project – thinking that evolved with many nuances, together with pedagogistas, teachers, atelieristas, cooks, auxiliary staff and parents.

In 1981 Malaguzzi had the idea for the exhibition If the eye leaps over the wall. Hypotheses for a pedagogy of vision (renamed the Hundred Languages of Children – Narrative of the Possible in 1987). The exhibition was a synthesis of ideas, thinking and experimentation from municipal infant-toddler centres and preschools and contributed to building an extensive structured network of international relations. 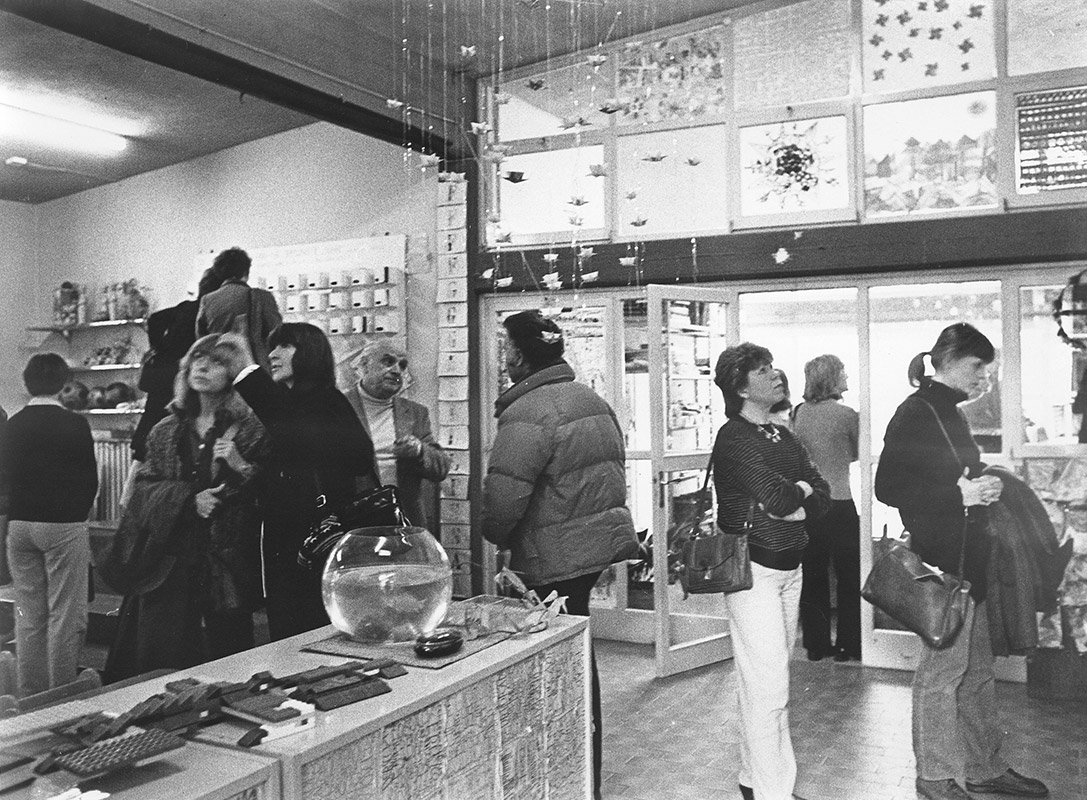 On reaching retirement in1985 Malaguzzi took leave of his role as Director of the municipal infant-toddler centres and preschools but was entrusted by the municipality with continuing to collaborate on specific projects in the schools, and with developing the international work of the Hundred Languages of Children exhibition. 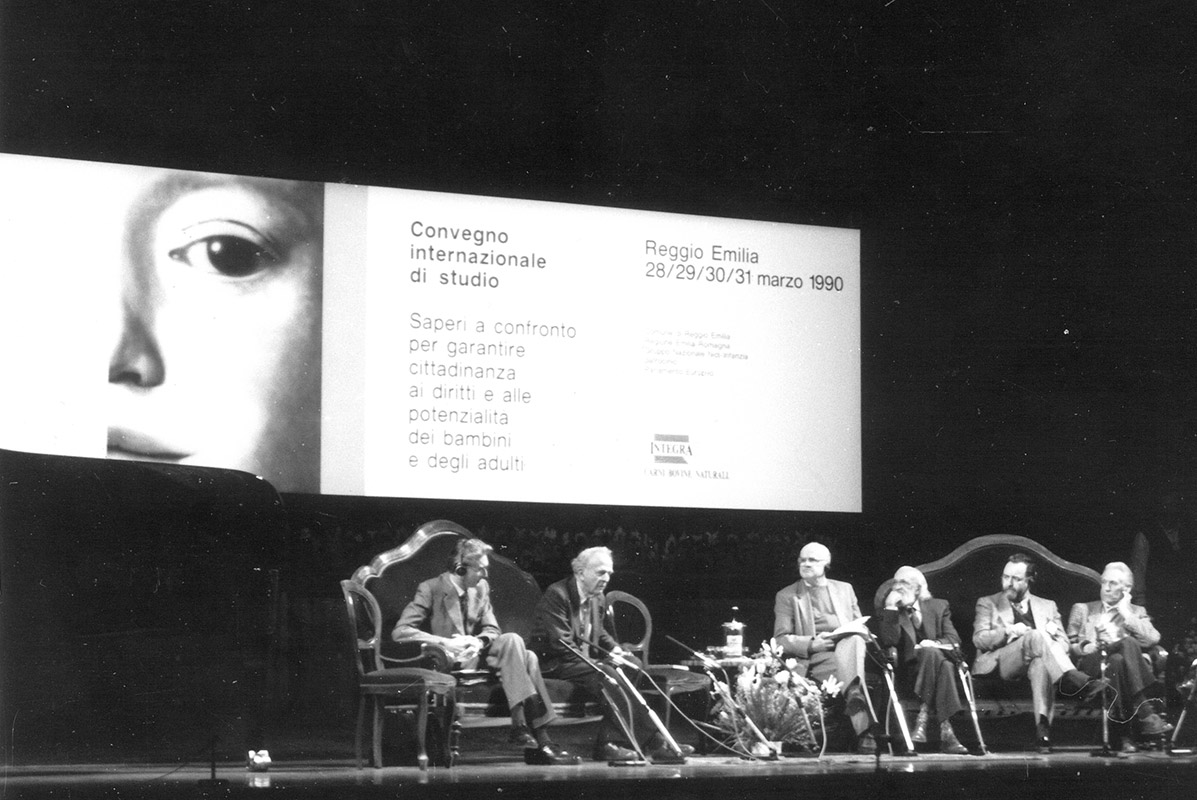 "Who am I Then? Tell me that first (Alice) - Knowledges in Dialogue to Guarantee Citizenship to the Rights and Potentials of Children and Adults". Conference, Municipal Theatre of Reggio Emilia, 1990. Speakers, from left: Luciano Corradini, David Hawkins, Loris Malaguzzi, Paulo Freire, Andrea Canevaro, Mario Lodi.

In 1990 Malaguzzi conceived personally oversaw the development of an important international conference, Who am I Then? Tell me that first (Alice) - Knowledges in Dialogue to Guarantee Citizenship to the Rights and Potentials of Children and Adults. 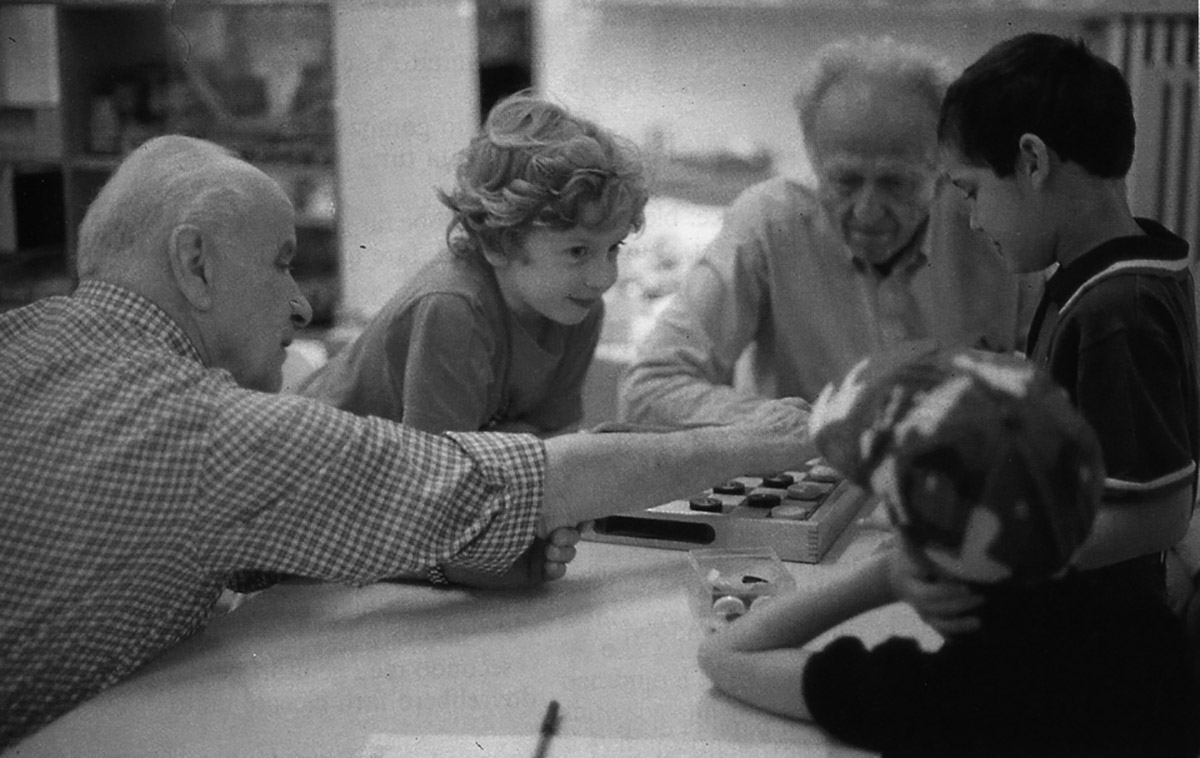 In 1991 “Newsweek” magazine cited the Diana preschool, as representative of all Reggio Emilia’s municipal infant-toddler centres and preschools, as one of the best ten schools in the world. International exposure and media coverage increased dramatically and Malaguzzi was aware that – for its own safeguard, and in order to further develop its research – the educational experience had to find new ways of welcoming constant requests for collaborations.

From these first ideas and thoughts Reggio Children and the International Centre dedicated to Malaguzzi's name began to take shape.

“A gulf is always needed, for men, for children, for women. It is an enclosed place, a more silent place, a place where we can think more, and think better.”

(Loris Malaguzzi, in his speech at the Kohl International Teaching Awards, Chicago, 1993) 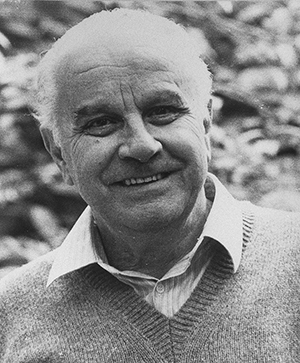