One city, many children

Reggio Emilia, a history of the present

"One city, many children" is a genuinely collective autobiography, which recounts how municipal infant-toddler centres and preschools were born, and their experience from 1860 to the present day.

THIS EXHIBITION IS ON SHOW AT THE LORIS MALAGUZZI INTERNATIONAL CENTER.
FIND OUT HOW TO VISIT IT:

"In the name of the scandalous and revolutionary force of the past."

"Here there are children and adults seeking the pleasure of playing, working, talking, thinking and inventing together, occupied in learning how the being and the relations of things and of people can be researched, made better, and enjoyed in friendship."

"What made the difference was, as a Municipal Administration, promoting a politics of early childhood that tied together ideals and concreteness, quantity and quality."

One city, many children is an exhibition that tells the story of how Reggio Emilia’s municipal infant-toddler centres and preschools were born and the experiences within them. An initial prologue (1860-1945) is followed by different sections of deeper exploration divided into decades, from Liberation after the war to the present time.

The narrative is developed around some central themes:

participation by the city and families

the central protagonist role of women and the women’s movements

the relationship between pedagogy and politics

the original pedagogical thinking, which is internationally acknowledged.

This story is part of the history of Italian education and culture, which in turn reference other stories and histories. The connections with Italian and international events emerges through references to literature, cinema, the arts and music, offering visitors a map to better find their way.

The exhibition opens with a video story of the period between 1860 and the opening of the first municipal preschool in 1963. Decade by decade the history is then developed following three layers of reading.

Text on panels introduces the time in history and connects this with experience of education in Reggio Emilia, highlighting which schools and centres opened.

A visual history on screens tells the story of education in Reggio Emilia, referencing the local situation and the national context

On a lower part of the panels a red thread takes us through selected events around the world and in Italy, giving a broader historical context. 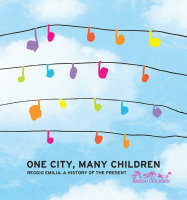 One city, many children

The story of the birth and development of Reggio Emilia’s municipal preschools and infant-toddler centres: a
b... 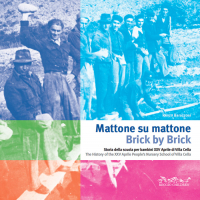 The history of the XXV April municipal Preschool in Villa Cella (RE): opened and self-managed after World War ...

The documentary film on the history of Reggio Emilia’s municipal centres for early childhood, with historical ... 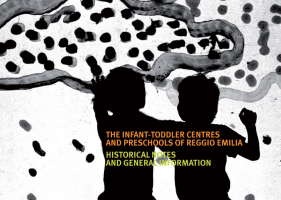 The history of Reggio Emilia’s municipal infant-toddler centre and preschool education is long, courageous and... 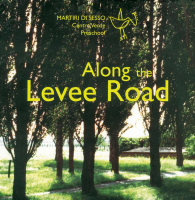 Along the Levee Road

A day visit to the Loris Malaguzzi International Centre

“A festive thought” is an exhibition telling the story of research, realised with children aged 2-6, which aim...

"Bordercrossings" is an exhibition-atelier that tells the story of research done between digital and nature in...

"Mosaic of Marks, Words, Material" is an exhibition-atelier that tells the story of research done in Reggio Em...