The Ray of Light Atelier is a place of research and experimentation where light in its different forms is investigated, through explorations provoking wonder and curiosity, and which stimulate creativity and deeper knowledge.

THIS ATELIER IS SET UP AT THE LORIS MALAGUZZI INTERNATIONAL CENTRE. <br>FIND OUT HOW TO VISIT IT:

The Ray of Light Atelier sprang from an inter-disciplinary group of architects, atelieristas, pedaogistas, physicists, teachers and educators. It is a place that welcomes children of all ages, teachers, cultural workers, and parents, with the intention of favouring an approach to reality that gives meaning and greater freedom to the scientific thinking innate in human beings, and which seeks enrichment.

Light and the phenomena of light are doors leading to discovery and knowledge of the world. They can be explored though the ‘classical’ range of visible light, which can be broken down into colours, but also through the invisible spectrum with, for example, infra-red and ultra-violet rays. There is particular investigation of the phenomena in which rays of light are disassembled, refracted, reflected, diffracted, propagated and emitted.

This idea led to the Illuminatories: contexts organised around a knowledge concept or problem, and offering different tools, materials, questions, encounters and access points. These do not guide investigators towards a single solution but make different journeys possible, and are particularly conducive to interaction and the construction of group learning.

Through the means of different languages – words, drawings, sounds, constructions, visual compositions – the Ray of Light Atelier offers an active approach to science, with which we can construct and verify hypotheses and theories. It is a place of research, dissemination and formative experience where the imagination, the fantastical, and the narrative form explanations and interpretations in organic ways with more scientific and rational processes.

The Ray of Light atelier was created in 2005 by an interdisciplinary project group made up of architects, atelierista’s, pedaogista’s, physicists, teachers, and educators. That same year a first prototype of the atelier was presented at the Genoa Science Festival, and on 23 February 2006 it was shown in the exhibition-atelier space for the opening of the Loris Malaguzzi International Centre. Over the years the atelier has continued its reinvention, presenting constant changes in the spaces and what it offers.

The project is promoted by
Preschools and Infant-toddler Centres – Istituzione of the Municipality of Reggio Emilia
Reggio Children
The Department of Engineering Science and methods, University of Modena and Reggio Emilia

Exhibition connected to the atelier

The Wonder of Learning 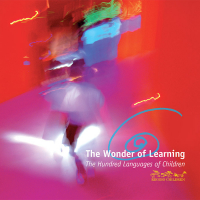 The Wonder of Learning

The catalogue of a large exhibition, born international, and travelling the world since 2008; it speaks of the...

A collection of wonderful ideas, micro-stories, children’s thoughts and theories, fragments, which, thanks to ...

Education is a right. Reggio Emilia explores and examines new challenges in education

A series of web confere...

Greetings to the city

A hundred years of Loris Malaguzzi

In 2020 we celebrate a hundred years since the birth of Loris Malaguzzi, inspirer of the Reggio Emilia Approac...

The Digital Landscapes atelier invites us to explore an environment with analogical and digital tools and mate...

The Secrets of Paper Atelier

The Secrets of Paper Atelier investigates the qualities of a commonplace material to discover its anatomy, its...

In the Shape of Clay Atelier

In the Shape of Clay atelier is an invitation to experiment with clay, a material that is soft, fresh, generou...